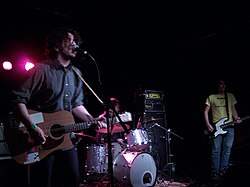 In a world of styled and preening indie bands, Sebadoh stand out. Tonight’s lesson in punk rock marked a welcome return for one of alternative music’s pioneers.

This was the tally at the end of the night. Songs played in 90 minutes: 30. Bass amps blown up: 3. Guitars disrespected with stickers: 3. Egos: 0.

Egos: 0. How often do you see that? Sebadoh have two drummers, three vocalists, three guitarists and three bassists…but only three members – Lou Barlow, Eric Gaffney and Jason Lowenstein reunited 14 years after their ‘classic’ line-up. It could be there’s no time for egos. But what’s more likely is that they use their skills as a means to an end, rather than a platform for ‘showmanship’ or adoration, which is a rare thing.

Taking the lineage of groups like Hüsker Dü and Black Flag, Sebadoh formed as a side project to Dinosaur Jr, and produced eight albums in ten years. Two records were particularly influential – ‘Bubble and Scrape’ and ‘Harmacy’ – and succeeded in achieving a near perfect blend of noise and melody through an obsessive DIY work ethic and a filter of drug use and tape hiss.

Tonight we had groups of songs from almost every era, with instrument swaps in between. ‘Weed Forestin’’s ‘New Worship’ opened things for the first group, with Barlow getting screaming distortion from his acoustic guitar. Other early tunes – ‘Broken’ and ‘Moldy Bread’ included – resulted in the first blown bass amp. With ‘Mindreader’ from ‘Harmacy’, Lowenstein kicked off the vocals – his way with a terrifying scream undiminished by the years. Between songs, we heard about Barlow’s fear of joining ‘Space Book’ and his surprise that ‘anyone turned out to see us at all.’ After all, this three piece are each 40-something years old.

By the end – and two more broken amps – we’d had ‘Soul and Fire’, ‘Bouquet for a Siren’ and an encore of fan favourites ‘The Freed Pig’ and ‘Gimme Indie Rock’. We’d smiled and sweated and clutched our ears in pain, and went home happy and grateful that there are still bands that haven’t stepped out of a salon…that still give everything…that are still punk rock.